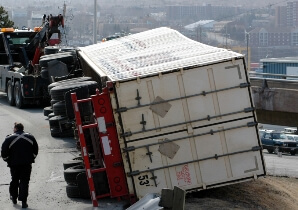 According to the National Highway Traffic Safety Administration (NHTSA), the number of people injured while driving on the nation’s roads was 2.3 million people for the year 2013. Of these crashes, 330,000 involved large trucks (a truck with a gross vehicle weight greater than 10,000 pounds), and 24,000 resulted in one or more injuries. Large trucking accidents also killed 691 people in 2013.

Who Dies in Trucking Accidents?

Given the disproportionate size of the trucks compared to the vehicles they strike, the drivers and occupants struck by a truck have a higher rate of injury and fatality than in any other type of vehicular collision. The nature of the injuries sustained in the passenger car often includes head, neck, and spine trauma. This is in addition to broken bones, concussions, lacerations, and other serious injuries, while injuries to the truck driver are often minor or non-existent.

Those injured in trucking accidents usually face a long road to recovery, including medical care, impaired work ability, and pain and suffering, not to mention the financial costs that go with them. Unfortunately, insurance companies, trucking companies, and their lawyers are prepared to seek the lowest settlement possible – or even deny claims altogether. With a limited amount of time in which to file a suit, it is important that trucking accident victims speak to speak to an experienced trial attorney as soon as possible