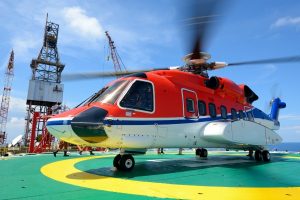 Helicopter transport is a common choice for shuttling offshore workers to and from oil rig worksites. Offshore platforms are not suitable for landing a small plane, and boat travel is much too slow. While helicopters offer the quickest method for moving maritime workers on and off of a vessel, they are also among the most dangerous choices for transportation. Unlike an airplane, the spinning props of a helicopter don’t glide. When the props stop spinning, a chopper crash is imminent.

Richard J. Plezia & Associates has an experienced offshore helicopter accident lawyer team in Houston, Texas that will represent injured employees and families suffering the loss a loved one in a chopper crash. Our maritime lawyer team fights for just and timely financial payouts that offer real compensation for your loss.

A number of problems can occur when traveling to and from work in a helicopter. Common causes of accidents include:

Injuries from a chopper crash can range in severity from broken bones to wrongful death. Offshore workers involved in a helicopter accident will often be unable to work during their recoveries. As maritime workers, you may qualify for Jones Act financial compensation in the aftermath of a chopper crash.

The Jones Act may cover maritime workers injured by a chopper crash. Signed to law in 1920, the Jones Act was originally known as the Merchant Marine Act. The federal law was designed to protect maritime workers unable to access workers’ compensation benefits for damage recovery after a personal injury accident. Qualifying for Jones Act coverage is a matter of meeting the considerations of a “seaman for purpose” on a “vessel in navigation.”

If you have been injured in a chopper crash, contact the offshore accident lawyers at Richard J. Plezia & Associates for a free review of your case. Recovering damages for medical bills, lost wages, and mental anguish can all be part of your financial payout from a pilot and/or helicopter company that acted with negligence. Our attorney team represents injured maritime workers across the Houston area. Call us today and speak with our experienced offshore helicopter accident lawyer team.